ROUNDTABLE PRESENTATION ON ORIGINS OF BLACK AFRICANS AND COLLECTIVE INTERESTS

1. LIMITATIONS OF HISTORY AND ARCHAEOLOGY

a) There is a Western bias towards an East Africa Origin of humanity since it authenticates Abrahamist Eurasian belief systems. Nigeria as the origin of humanity and civilization shows civilization was a purely Black effort and will unify the Black race and challenge global White supremacy.

c) This line of study turned up prehistoric skeletons from the Ethiopian-Kenyan highlands: the Lake Turkana area. A 3.5-million- year-old Australopithecus Afarensis skeleton called ‘Lucy’ was found in 1974; the next year, a whole family was found. In 1993, a skeleton of a 4.4-million-year-old hominid, Australopithecus Ramidus, was found in the same area.

These and other findings were used to develop the theory of evolution, which conveniently assumed that the evolution spot was nearby, because the oldest skeletons were found around the Lake Turkana-Omo River. The evolutionary theory based on skeletal discoveries was challenged in 2002, when a skeleton more than six million years old11 (‘Toumai’) was found in the Saharan Lake Chad, northeast of Nigeria. Brunet, Michel, et al., ‘A New Hominid Finding in Chad,’ Nature 418 (2002).

d) Iwo Eleru caves in Isharun, Akure (located in Yorubaland, southwestern Nigeria) are the oldest proven settlement in black Africa, dating to more than ten thousand years before Christ, and the Akure Palace is the oldest surviving palace in black Africa.

a) In a comparative DNA study of more than 400 communities worldwide from 1990 to 2002 called The Human Genome Project headed by Dr Francis Collins, it was discovered that the oldest DNA strand traced along the female lineage came from southern Nigeria, thus making it the true ‘Garden of Eden’.

b) The fact was covered up in order to not discredit the major belief systems, Christianity and Islam, and their stories of human origin. But, whether out of racism or ignorance, there were questionable categorizations and conclusions that continued to obscure the truth.

c) Another project called The Human Genome Diversity Project was started by Stanford University, in collaboration with France’s Centre for the Study of Human Polymorphism. They created a HGDP-CEPH Human Genome Diversity Cell Line – a resource of 1,063 cultured lymphoblastoid cell lines (LCLs) from 1,050 individuals in 52 world populations, banked at the Foundation Jean Dausset-CEPH in Paris. d)

i) Midway through the Human Genome Project, Christian Scientists applied pressure on the head, Francis Collins, a born again Christian, and politicians not to release what was the oldest DNA strand because it would shake mainstream belief systems.

ii) At the end of the HGP in 2002, the result was not made public but the immediate creation of the International HapMap Project to use the results to map out all diseases with 100 Yoruba DNA samples taken from Ibadan, spoke louder than words. Like the Industrial Revolution was built on the backs of Yoruba slaves, the new Biogenetic Revolution was to be built on Yoruba DNA.

v) In 2009, Tishkoff et al became the first to make public presentation of the data but stuck to the Western policy of not acknowledging that Yorubas were oldest. The only statistical data of value that provided the least biased insight, although not perfect, was the Global Unsupervised Structure Run (Table S8) that showed the proportion of genes of each ethnic group associated to 14 pre-determined ancestral homes. Even though the number of possible Associated Ancestral Clusters (AACs) was too high with K=14 (where K is number of possible ancestral clusters), it provides the true picture.

vii) Computer generated probability values tying linguistic groups to ancestral clusters were wrongly skewed due to ill-defined linguistic groups and the inclusion of relatively too many tiny hunter-gatherer groups in comparison to larger Original African groups like Ijaw and Shona that were left out.

viii) First, contrary to even mainstream linguistic classifications, they added the Kodofanian languages to the Niger-Congo language family to create a Niger-Kodofanian language family, which prevented the figures not being closer to 100% in Table 8. The wrong classifications were even made worse in Table S9: Proportion of AACs from the Africa Structure Run at K=14, and rendered the result pointless when instead of separating Kodofanian to make it Niger-Congo, they separated East Bantu into a cluster that had no group above 0.48.

ix) Second, contrary to basic logic and statistics, they concluded that Lemande of a mere population of 6,000 was the ancestral home of Original Africans in the Niger-Congo/Kodofanian phylum, despite the next five highest values in the global structure run for Niger- Kodofanian showed a pattern while Lemande was an exception.

x) Third, they concluded that the Namibia/Angola San homeland was the origin of humanity because it had the highest AAC value among the hunter-gatherers, regardless of the established fact that they migrated south after their split with Western Pygmies and the high ancestral probability value is retained due to their relative isolation in the Namib grasslands and desert.

xi) Prof Reich, Harvard Medical in Simons Genome Diversity Project like Etienne Patin in 2016 came out with more definitive evidence that the first and second differentiation of Pygmies were from Yorubas – The KhoeSan in south Africa for example separated from the Yoruba in Nigeria around 87,000 years ago while the Mbuti split from the Yoruba 56,000 years ago. http://www.dailymail.co.uk/sciencetech/article-4470342/Genetic-study-reveals-Africans-descended-group.html 4th May 2017

e) WILD YAM QUESTION: In a study of forest hunter-gatherers, Baka (Pygmies), in Southwest Cameroun by Hirokazu Yasuoka (2013), it was proven they could survive solely on yams throughout the year since by merely discarding the inedible end of yam tubers propagated new yams more than planting the seeds of certain yam species. One person consumes 1.5kg of Yam a day. With a yam patch producing 100 yams (300kg of tubers), and a clan of fifty people with an average of 96 patches of over 15 species of Yam, survival was guaranteed. Hirokazu Yasuoka 2103 (Kyoto University, Japan) Dense Wild Yam Patches Established by Hunter-Gatherer Camps: Beyond the Wild Yam Question, Toward the Historical Ecology of Rainforests Hum Ecol (2013) 41:465–475 DOI 10.1007/s10745-013-9574-z

g) Great Coastal Migration – successive waves of humans migrated out of the Horn of Africa into Eurasia, initially settling on the coast, all the way to China, Australia and the Americas. They migrated out of the Ethiopia into south Arabia, present day Yemen and later Sinai out of Egypt into Arabia. They kept to the coast into Indus Valley and the earliest date of settlement in South East Asia is 50,000 years ago while reaching Australia by 48,000 years ago. Phillip Endicott, Mait Metspalu and Toomas Kivisild (2007),The Evolution and History of Human Populations in South Asia: Inter-disciplinary Studies in Archaeology, Biological Anthropology, Linguistics and Genetics, Springer Netherlands, ISBN 978-1-4020-5561-4,

a) There are only 2 ethnolinguistic groups – Original African (Niger-Congo) and Afro-Asiatic.

e) Pygmies diverged from Yorubas around 80,000yrs ago and migrated across Africa, so why are Niger-Kongo ethnolinguistic groups aged around 5000yrs ago

f) IFA – the African Information Retrieval System is shared by all Original Africans of Southern and Central Nigeria – same 16 divisions with minor changes in names of ejiogbes. See table below

5. PRECESSION OF THE SUN

a) It takes the Sun 26,000yrs to make a complete revolution. Ancient knowledge systems like Hinduism, derived from Ifa, also calculated this and showed that history is not a linear but cyclical function, based on the 26000 year precession cycle of the Equinox – the binary movement of the Sun. Yuga in Hindu, Ugba in Eastern Yoruba.

This could be divided into 12 segments of 2000 years each.

i) The 2,000yr eras of the Biblical Horsemen or of Orishas makes history clearer.

v) Age of Osun (4000 to 2000BC) brought the building of pyramids and trading empires of Sumner, Indus Valley Civilizations etc;

vi) Age of Ogun (2000 to 1BC) brought the spread of warring Eurasian horsemen and their composite bows that overran Black empires from China to Egypt;

vii) Age of Olokun (1 to 2000AD) brought Christianity, Islam and other religious dogma, and propaganda from racist capitalism etc used to dominate the world

viii) Age of Shango (2000 to 4000AD) will bring enlightenment and global economic justice.

6. Political implications of Nigeria Origin of humanity and civilization

a) With the DNA and other scientific proof that Yoruba, the largest Original African group, the most prosperous in Black Africa, is also the origin of humanity and civilization, Southern and Middlebelt leadership should work towards establishing an Original African cultural and socio-political platform.

b) Southern and Central Nigerian leadership should highlight the fact that all Original Africans are not only tied to a common origin but shared similar collective aspirations. An Original African platform comprising South and Middlebelt will be a counterweight to the Northern Islamist platform.

c) An Original African platform will be constitutionally effective since it accounts for at least two thirds of Nigeria – 24 states comprising SW, SE, SS, NC and Taraba (an Original African state of the Jukuns) wrongly removed from NC and placed in NE. 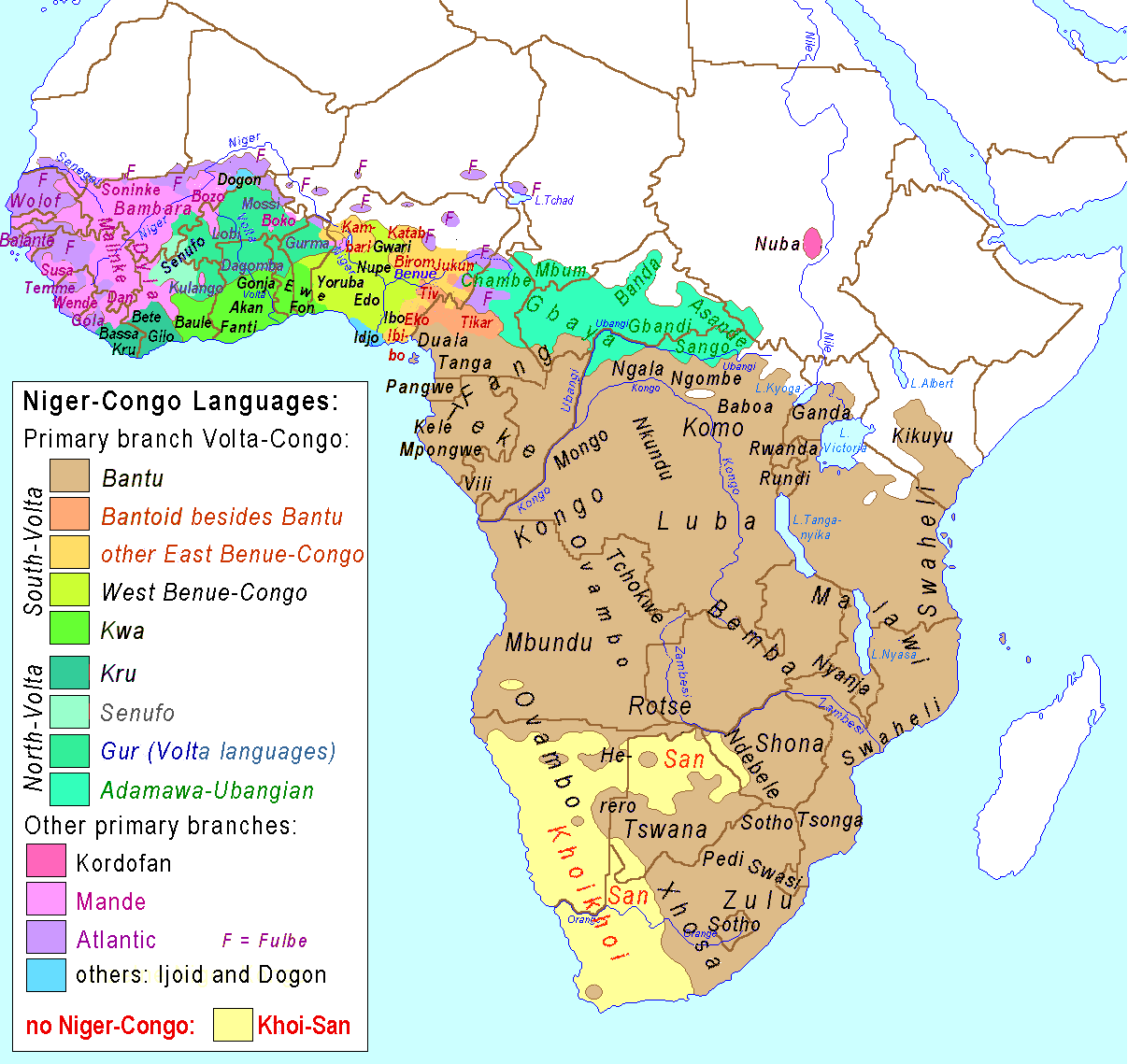