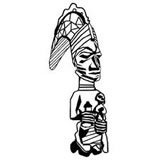 There is brewing controversy over what Original African traditionalists call the libelling of Eshu by Christians and Muslims, who equate Eshu to Satan or the Devil.
There are plans for educational, intellectual and especially legal challenges to stop the wrong usage. Eshu is not SATAN but the God of Information instrumental to the creation of the Ifa divination system – a system transferred to Asia nearly 6,000 years ago to form the basis of the I-Ching, Buddhism and Western Astrology.

Original African belief systems never had a SATAN figure, or believed that there was a diametrically opposite of God. From the smallest bit of nature, known as the atom, reflected in every other thing, positive and negative attract and exist side by side. Original Africans, Chinese and Indians believed in the natural laws of retributive justice known as karma/Yorubas Esan/Igbos Ofo and Ogu.
To them God was almighty and encompassing both good and evil, and that it was for each individual to decide which to choose and be prepared to reap what they sow.

The blame is laid at the foot of the likes of Samuel Johnson, Ajayi Crowther and other Christian returnees that translated the Bible and later the Koran into local languages using superficially similar but fundamentally different concepts and words.
Original Africans reckon that Abrahamic religionists used the misconception to label vast African knowledge bases evil by mischievously equating them to the work of the devil, thus scaring Africans from their true histories, sciences and philosophies.

Also many blame the concept of the Devil, and the relegation of personal responsibility, to the prevalence of corruption in modern Africa.

Since the 1970s upsurge in pseudo-conservative Pentecostalism and Islamic Fundamentalism in Nigeria, there has been an upsurge in corruption, Prince Justice opined.
If we complain about the fall in morality, we must question those who set the moral standards, which is no other than the Abrahamic religions.
If every single character in the Bible from the one that 419’ed his father for inheritance, to David that sent a man to death to take his wife was a flaw character/criminal but forgiven and blessed by God, while the only erring character in Yoruba mythology, Shango, a king was pushed to suicide for a simple misdemeanour, it is obvious which sets a higher moral standard.
Every single Nigerian admits that corruption will fall if officials are made to swear by local Gods, instead of foreign permissive unjust Gods.

While Original Africans continue to profess their ancient freedom to worship and tolerance tenets, they seek fairness in
the portrayal of their beliefs based on live and let live and wonder why they have to be publicly misrepresented.
Talks are on-going to launch legal suits to stop the wrong usage, while some people want to go further by seeking punitive damages against CAN and Supreme Islamic council equal to the amount realized from the sale of Yoruba Bibles and Korans, since Eshu as Satan was the key selling point in converting Africans.