Ifa is not Arabic geomancy, they did not civilize us – ASHE Foundation 1

ASHE Foundation President, Prince Justice Faloye raised the alarm that Yorubas are at verge of forever losing their identity if they don’t vigorously challenge the recent order given to Olorishas to stop using the 16 sector, erindinlogun system Ifa corpus, containing everything about Yoruba history, culture, philosophy and identity.

Academically known as the African Information Retrieval system used by Yorubas, Igbos (Afa) Edos (Iha) and all other South and Middlebelt ethnic groups, this order was based on the wrong conclusion that Ifa was derived from Arabs, and not Yoruba, therefore shouldn’t be used by Olorishas.

‘Until we defeat the false Eurocentric perspective of the origin of humanity, we Africans will continue to be lost and pale into insignificance as our ancestors are white washed and descendants misguided. We must articulate our true genetic and cultural origins, otherwise for the lack of knowledge a people perish’.

I first took serious note of this misconception when Professor Agbakoba of the University of Nigeria, Nsukka Department of Philosophy raised it at the Conference of African origins, arguing that the Original African Information System (Ifa/Afa/Iha/Eha etc) was developed when Yorubas, Igbos and other groups were still together as a unit and later dispersed with the knowledge at least 5,000yrs ago, therefore couldn’t have originated from Arabs that came into existence just 4,000yrs ago.

Like Frobenius and other Western scholars that wrongly postulated that Ife Bronzes must have Greek origins because of its advanced technology, we have Dr Paula Gomez, Alaafin of Oyo’s cultural marketer and others postulate that Ifa must be from the Arabs. Their wrong belief that Yorubas migrated from the Middle East and Northern Africa is based on the misconceptions that Man originated in North or East Africa. However, recent scientific evidence from genetic and cultural anthropology collaborates Ifa records that humans originated from the Southern Nigerian coast. 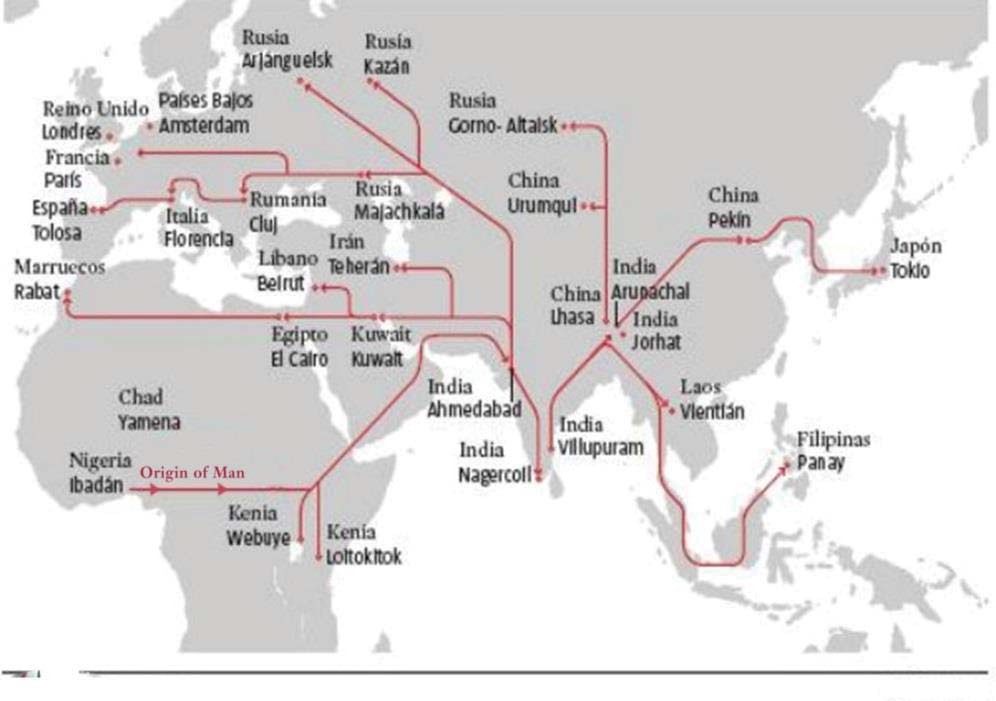 According to the Simons Human Genome Diversity Project (2017), Yorubas and San diverged 87,000yrs ago, and from the preponderance of evidence and logical deductions, this occurred around the freshwater and mangrove swamps of Southern Nigeria. Now over time, the people naturally evolved an advanced social organization system to store information, a knowledge bank with 16 divisions that naturally evolved from the binary system, tied to the lunar calendar of four days a week. The 16 divisions combined to make 256, which naturally emitted electromagnetic pulses tied to DNA.

Analysing Yoruba intellectual and philosophical foundations with modern terminology, Prince Justice likened Ifa to the hardware, the structure, while Orishas were the software. Ifa is the science while Orishas and Ese are spiritual arts. The Orishas are spiritual conceptualization of natural phenomenon like Information (Esu), Shango (Justice), Osun (love and fertility), Obatala (religion, law and philosophy) Oya (revolutionary change), Ogun (metallurgy, war, positive action) which hold all the data pertaining to these concepts. However like a database, they need a Retrieval system to access and process the data into applied knowledge. Orishas are God representatives on Earth while Ifa is the voice.

Ifa is the world’s first knowledge bank and religion, the source of mathematics, sciences philosophy and other studies that spread across the world. It spread to Black Indians of the Indus Valley civilizations around 3,500BC but was adopted by the invading Whites into the Rig Veda that became the foundations of Buddhism. It also spread to China in form of Taoism and I Ching.

Ifa known as ‛ilm al-raml, or the “science of the sand” spread to the Arabs through Prophet Idris (Enoch), who claimed it was given to him by an angel, but many Islamic writers have refuted the Arabic origin of Ifa. The book Muqaddimah by Ibn Khaldun (Arabic: مقدّمة ابن خلدون) written by the Arab historian Ibn Khaldun in 1377 stated categorically that it belonged to ancient pre-Islamic pre-Arabic civilizations. In Arabic folklore, like One Thousand and One Nights, it was a Black African Babalawo that used Ifa to find Aladdin. Many Islamic purists frown on Sufism for borrowing the Ifa from Black West Africans.

There are many logical conclusions that show that Ifa originated here in Nigeria, not Arabia, the most important being that it evolved before the Bantu Migration which was long before the Arabs. The Attah Of Igala categorically stated that Ifa is our identity and the connecting link between all Original Africans. Therefore the order by Dr Paula Gomez to Olorishas to stop using Ifa is totally out of order. Some people have alleged it is a ploy to make Shango a standalone religion different from Ifa and Yoruba. A breakup of Yoruba culture for pecuniary motives. Infact there is some evidence from Ifa that Osun, the mother of humanity, was actually the first to discover the erindinlogun Ifa system but Osun is not a religion on its own. 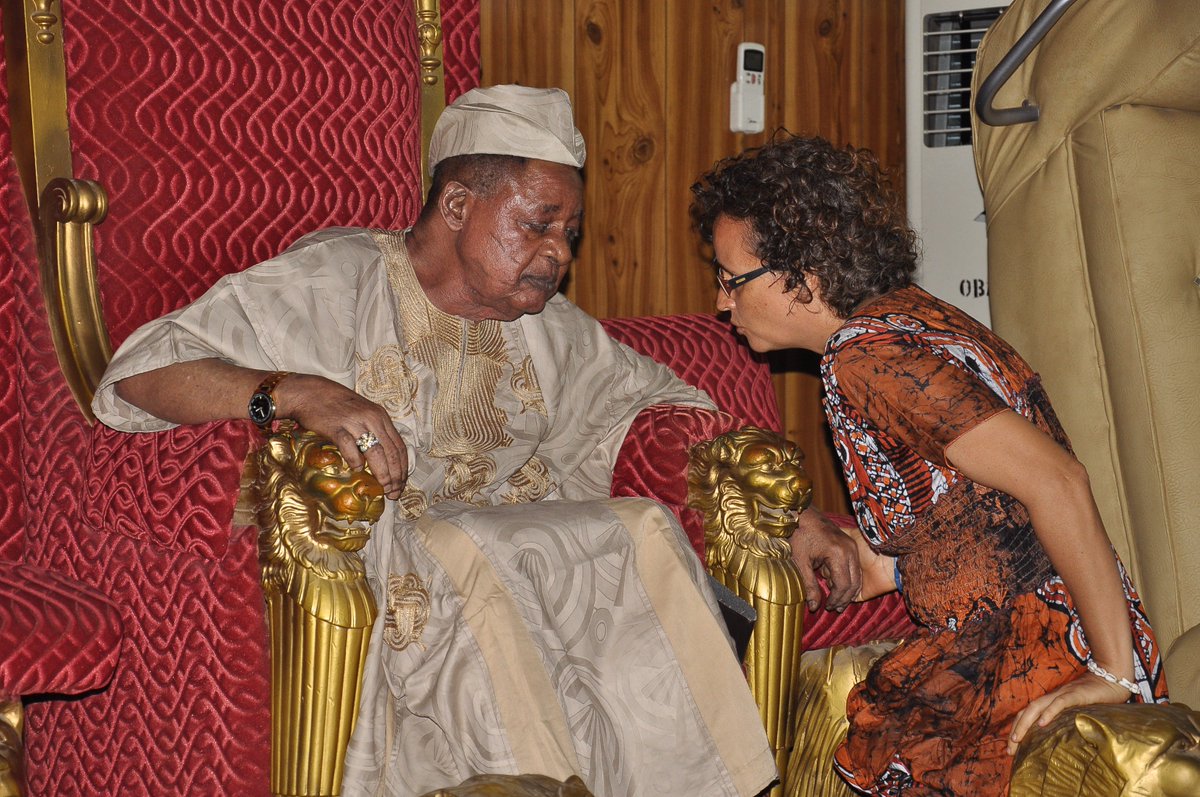 Though some are uneasy that a White Portuguese woman was put in charge of Oyo’s Olorishas, some see it as a brilliant move to market Oyo and Yoruba culture to Brazil and the rest of the American diaspora. But breaking up Yoruba culture is unacceptable.

Traditionally, we can’t question his royal Majesty Kabiyesi Iku Baba yeye, Alaafin of Oyo, we implore him to rein in Paula Gomez, his overzealous marketer that is changing the product without the manufacturers consent. Sold as seen. It is highly insulting for Paula Gomez to go around calling Ifa and Orunmila adherents 419, prohibiting Olorishas from using it, depriving them of the science and electromagnetic forces based on the wrong belief Ifa is Arabic geomancy. Care must be taken that Dr Gomez misconceptions doesn’t tarnish the enviable legacy of Oba Adeyemi, one of the few shining stars of Yoruba monarchy that has done so much to push Yoruba culture. As the popular saying, not only Oyo, but Yoruba, ‘o se bi Baba enikankan’ meaning Yorubas didn’t copy anybody’s civilization.

Unfortunately it was Oyo that brought the Yoruba name from Afroasiatic origins that is now tying Ifa to Arabic origins. The Lamurudu and Yoruba migration from Mecca are falsehoods and revisionism that came from Oyo due to its closeness to Islamic centers and their insidious cultural imperialism.

However, whether it is the Oyo Mecca or Igbo Jewish link, it all stems from not articulating Original African cultural and genetic origins and identity away from the wrong Eurocentric or Arabic perceptions. If we all know that we originated from an ancient coastal Ife then everything will become clear. Unfortunately, until we do so we shall continue to fail culturally, politically, economically and every aspect of our existence. As the Yoruba saying goes “Omo ti o gba gbe Ile so apo Iya ko” – the child that forgets home is forever doomed to suffering.

Prince Justice warned that if we don’t understand our cultural origins and identity, or allow outsiders to continue to confuse us, we would not be able to access our ancestors vast knowledge bank that includes medicine, sciences and technology. As far back as 2000BC, we produced Iron and steel in Lejja and across Southern Nigeria but today 4000 years later we don’t have a complete iron and steel complex necessary for industrialization. If we don’t understand our true cultural linkages across South and Middlebelt, we can never ever build a Southbelt alliance to defeat Afroasiatic and European hegemony. The Black Race will never rise to attain global racial parity, so this is not only about religion and mythology of the past, but our present and future at stake.

One comment on “Ifa is not Arabic geomancy, they did not civilize us – ASHE Foundation”