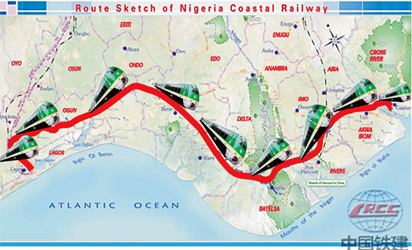 The announcement yesterday that Nigeria signed an MOU with the Russians over the Lagos-Calabar railway brought me to tears. This was a $12 billion contract signed with China in April 2014, but our Western puppet masters made Buhari revoke it and re-award it to GE USA, and now we are begging Russia. Haaa what a waste! A waste not only in billions of dollars but an entire generation, or more! Below is the report of the initial signing by President Jonathan.

In 2014, all those who knew me knew that one of my greatest points against Buhari was that on behalf of his USA supporters, he was going to sabotage the Lagos-Calabar railway, which was China’s largest foreign investment in the world, and the South’s most important infrastructural development in 100 years since 1914. We have now gone from the $12b China financed and built railway, to incur billions of dollars in breach of an unnecessary contract with the Americans, to beg Russia for finance and building.

Shame catch us, we couldn’t go back and beg the Chinese for the cheapest credit in the world, so we go and whisper to their ally, Russia as if Russia or even USA has ever built one in Africa. Only China builds such at the lowest prices and best credit terms in Africa and South America. When railways were raining in the world we used umbrella.

The British built railways from North to South for colonial exploitation, to empty our mineral resources and cash crops into the ports, and to dump their imported manufactures all the way to the North. This was solely for their own economic growth at our expense, while not laying railways that would enable us to trade and produce amongst ourselves.

Lagos-Calabar railway, linking the most populous, economically viable and prosperous areas together, is equivalent in economic importance to the 1800s Railroad boom on the east coast of USA that turned the USA into a global economic power. This was the crown of the Cotton is King Era that provided millions of jobs, opened up the rural areas, and ultimately its iron was the launchpad for heavy industrialization and the military industrial complex that led to its superpower status.

This East-West railway would revolutionize our economy, provide millions of jobs and be a launch pad for a complete iron and steel complex and industrialization. Every nation in the world that has done this became industrialized within 15yrs. However, US/UK/France object to the economic liberation and rise of the area known as the Nigger area, Aka Nigeria, and to make it worse, it was being built by the Chinese and for Southern Nigeria, formerly labelled the Slave Coast, so they brought in Buhari to sabotage it like they did with Ajaokuta, Mambilla HEP and Lagos Metroline in the Eighties when he overthrew Shagari.

Actually, it is lack of shame for Buhari to call the Russians to come back to rebuild Ajaokuta that was 85% complete before he chased them out on unproven corruption propaganda, and which was later handed over to Indians that stripped it of its assets.

I shouted myself hoarse warning about this threat. As the election approached, I rushed to Chief Falae to advise him to bring the issue to the forefront of the campaigning to alert the people that if Buhari came in to sabotage this particular project, our economic development would be arrested for a whole generation. 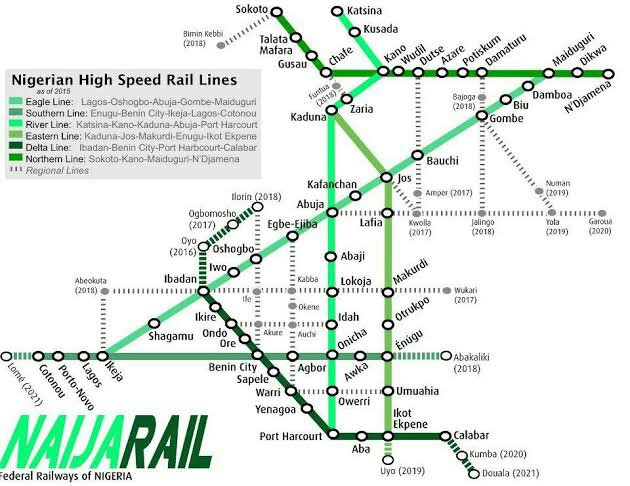 A Lagos-Calabar trunk railway line would make it easy for Ondo State and other states to build branches to the line which would open the rich countryside in all states from Lagos to Calabar to immense opportunities. He picked up his phone and called Dr Kunle Olajide, who invited me to his Efon Alaye residence where I presented the case and advised how it should be reflected in the campaign. He was pleased and said Aare Gani Adams had also presented a security report on the involvement of the West. He promised to speak to Prof Adeniran to invite me to join the PDP campaign headquarters, even though I wasn’t a PDP member nor partisan. I went to Abuja but nothing happened at Legacy House and I eventually returned to Lagos resigned to fate.

However, I kept my eyes peeled to see exactly how Buhari would sabotage the greatest infrastructural development in Nigeria. The first sign was when Rotimi Amaechi ordered down Finance Ministry staff from the plane and sabotaged Kemi Adeosun with a flimsy excuse that CCECC should not have paid for the flight tickets since they were just one of the companies being considered for the project. 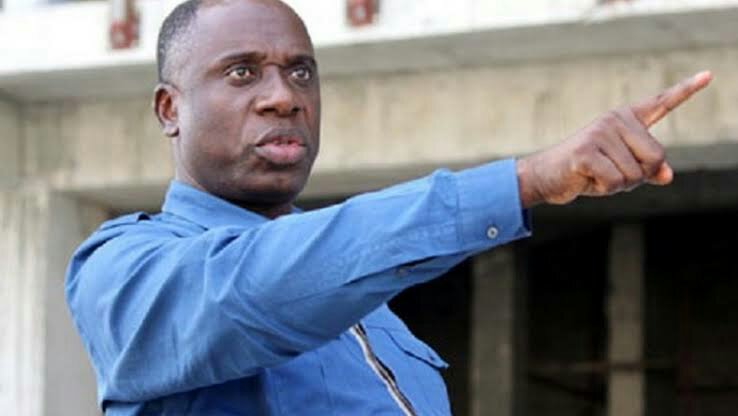 An outright lie and I was livid with anger because this was a contract that had already been signed and I was confident that no other nation on Earth could finance and build it for us at this point in time. The contract had been signed but the West sponsored the Chibok Girls affair a few weeks later to distract national attention from this historical achievement. Anyway, Kemi Adeosun reached China with no figures to discuss the modalities due to Amaechis sabotage.

At the next budget, monies earmarked for the right of way expenses were removed and it became obvious this government was set to kill the project. Eventually, we heard that the government had pulled out of the contract on flimsy excuses and re-awarded it to General Electric USA. I was heartbroken because I knew GE USA neither had the technical experience of ever building a railway of such complexity nor the financial capacity to finance it.

I instantly knew it won’t be built but most important we would have to pay billions to set aside the contract when we were actually ready to build it. In short, despite the USA never building a foreign railway since the 1800s ill-fated Argentina railway that nearly bankrupted Barings and other merchant banks, this move was a kind of extortion that must be paid if we ever get to build it. The breach of contract fines would be greater than the profit of who ever eventually builds it. The same trick had been used by the West in South America and Asia. In Mexico, the government was pressured by the West to cancel their Chinese built railways as seen below in the link

In Malaysia, a new government was brought to power with US inspired corruption propaganda like Buhari and he immediately set out to suspend all Chinese projects.

I am recounting all these not for partisan political motivations, but because it is important to increase the collective intelligence of our people to understand that more than anything it is Western Powers international geopolitics that has arrested our economic and political development. If things are not explained, the tendency is for self hate/racial inferiority complex based on the wrong belief that we Black people especially Nigerians can never get anything right. That we are genetically wired to fail. This is far from the truth and I say with evidence and logic that we should have become an industrialized nation, but every time that we make an effort to rise, the CIA inspires a corruption propaganda for regime change to someone brought in to sabotage our economy and especially economically liberating infrastructural projects. This occurred in 1966, 1983 and 2015.

Buhari was brought in by Obama to kill the economy and stop economic liberating infrastructural development, which he did by intentionally sabotaging our foreign exchange system, which wiped off $200 biilion within the first six months, and sabotaged our railway and electricity development. Buhari was to go against the local content principle that Nigerians should ideally be empowered by allowing local businesses increased involvement in the oil and gas sector. Under the guise of petrol subsidy corruption, he took the control of petrol imports from Nigerians and gave it to foreign oil companies that backed him to power. The same oil companies that received $25billion unapproved contracts while in a London hospice. All these economic sabotages led to the greatest and fastest disinvestment in our history. 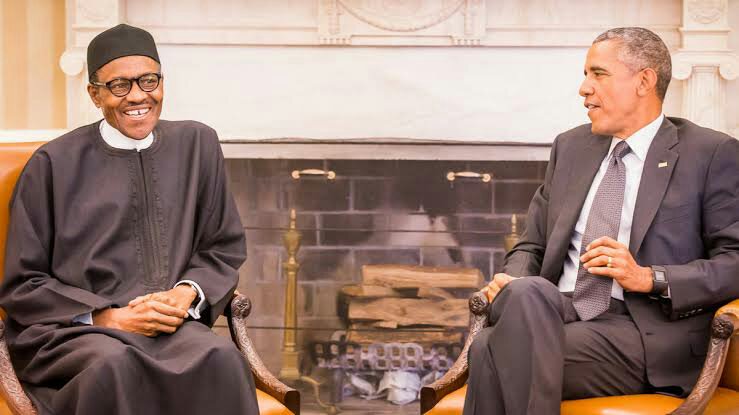 However, the Western Powers plan was to use him for only one term before bringing in another puppet for another plan. Buhari refused to step aside, believing that after all he had done to sabotage Nigeria to please the Western masters, he should be given another term, but that’s not how our slave masters operate. When they say Nigger jump, you jump without question. So, the West blacklisted him as a runaway slave.

Now, like most House Negroes banned from the White House, he has gone cap in hand to the East (Russia/China) to become a populist like Paul Kagame. As known, the West will come after him with a vengeance and probably push us into war. Buhari like many Black leaders since 1825 Haiti will cry foul and shout about Western slavery and colonization. Those who don’t know better across the Black Race will rally around him as a pro-Black leader, not understanding that this was a reluctant rebel shunned by our White Massas after he had sold us down the river. Those who genuinely oppose him from the South might be painted as counterrevolutionary sellouts from the Slave coast once again selling the Black Race.

Russians, after arming Chinas liberation like they armed African liberation movements, were the ones that laid the foundations of Chinese industrialization by building them 13 steel mills. But, now the Russians and Chinese knowing that Buhari is not a true revolutionary will accept him superficially to spite the West, but will never roll out their full economic and military support, knowing how he sabotaged their Ajaokuta and Lagos-Calabar railway.

The Lagos-Calabar line is not only important to the South, since it would later extend to Abidjan Ivory coast, as the West African coast becomes lit up like Dubai, to become the world’s most economically viable coast. This is the vision that the West want to sabotage but hang the blame on our collective conscience. Until we can raise our collective intelligence, we will remain perambulating and the people will wrongly blame their race of being incapable of rising. As Fela sang, we go dey perambulate and still dey the same place!

Oooo I cry and wonder where is Shango/Amadiora to strike our detractors.