There are only two Nigerian institutions with global long term perspectives in Nigeria: the Army and the Fulani caliphate. Unlike in India and even South Africa with century old political parties, in Nigeria political parties keep changing with election cycles.

Unfortunately, the Niger-Congo ethnolinguistic family that account for majority of Nigerian and Black African populations failed to articulate their cultural foundations that could inspire a long lasting political powerbase. Chief Awolowo understood cultural nationalism and used Egbe Omo Oduduwa to inspire a political movement, but one that could only account for a fraction of the Original African Niger-Congo cultural sphere. Nnamidi Azikwe whose politics took from the US Black movement also understood cultural nationalism but failed to differentiate between Original Africans and Afroasians.

The British and Fulani cultural imperialists knew the power of cultural nationalism, therefore the British divided the Southern protectorate into two, West and East, under the pretence of better administration. In contrast, the Northern Protectorate with a larger geographic and ethnic diversity was not only allowed to keep its cultural structure intact, but to also lay claims to the Middlebelt which belonged to Southern Protectorates Original African cultural complex.

The lack of the right unifying Original African identity and perceptions in the Southern Protectorate allowed the division to go unchallenged, which resulted in the arrest of the political and economic freedoms of the majority till today. The Middlebelt was not even a complete belt, since it didn’t extend to Nigeria’s eastern border. Taraba, an original African cultural state, a few miles to Niger Delta’s Cross River State, is wrongly allocated to the Northeast region.

The Original African cultural custodians, the monarchs, leaders and elders failed in their primary Original African duty to articulate their wider cultural foundations to their youth and politicians, to empower them with the knowledge to form strategic cultural alliances. When the Westernized freedom fighters, who carved tribal niches instead of a united South and Middlebelt alliance, failed against the united Afroasiatic North, the youth were misguided to gun down the elders of the North. Without a well articulated Original African platform, Original Africans became pawns on the Western military and Fulani platforms to push their selfish agenda.

They were misguided and divisive with separatists aspirations with no respect to culture and age, individually and collectively. The Igbos wanted their own Western styled nation and methodologies, which included annexing the culturally older Niger Delta in the region. Yorubas in the guise of Odua Republic wanted to reinvent the Ibadan militocracy that wanted to subjugate the older Yorubas but was summarily defeated in the Kiriji war. In the Middlebelt, the newcomers Tiv dreamt of cutting up the older Kwararafa empire. All were pipedreams that could never materialize without the articulation of their Original African cultural foundations.

The Yoruba Afenifere leadership at the beginning of this democratic dispensation won their territory, but without a wider cultural platform to foster nationwide ambitions, they lost Tinubu, who they empowered to govern their most important constituency, first to the Western platform and then to the Northern Islamic sociopolitical platform.

The Yoruba leadership’s persistence to restructure the political structure back to what it was before the coups, paid off with President Goodluck Jonathan who acquiesced to their demands for a national conference. The National Conference if nothing highlighted the similar collective aspirations of self determined states and regions. The South, overlooking the West-East 1935 colonial divide, spoke with one voice and united with the Middlebelt to provide the most comprehensive and liberating document in history.

The defeat of Jonathan and installation of a conservative Northern government, not only increased the restructuring agitations led by by Afenifere Yinka Odumakin, but also made it abundantly clear that we could never win without a South and Middlebelt against the Northern Conservatives and the Western powers that backed it into power. Thankfully, the Afenifere elders saw the wisdom of the Handshake across Original African cultural foundations. Chief John Nwodo, the president of Ohaneaze also saw the need to come together and oversaw the conference that led to the South and Middlebelt Leaders Forum. Pa Edwin Clark of Pan Niger Delta Forum (Pandef) and Pogus Bitrus, the new president of the Middlebelt Forum also warmed up to the unity. It must be said this was not the first attempt to unify but previous attempts always failed due to the lack of unifying cultural identity to cement the political unity. Blood is thicker that political spittle.

What makes this special is the presence of cultural custodians also unifying their cultural foundations, independent of political affiliations. Ooni of Ife Oba Ogunwusi, the Co-Chairman of Traditional Rulers, the effective leader of non-Caliphate monarchs, has made moves right from his enthronement to strengthen and unite the Original African cultural platform. Obi of Onitsha stated that Igbos migrated out of Ife. Attah of Igala stated that IFA, the Original African information retrieval system, is the unifying link since it keeps and dictates the cultural identity of all Southern and Middlebelt Niger Congo ethnolinguistic groups.

Afenifere leaders like Prof Akintoye, Chief Falae and Chief Ayo Adebanjo supported the Conference of African Origins that brought together the Amanyanabo Of Opobo representing the South-South, Ooni of Ife representing the Southwest and Attah of Igala of the Middlebelt, among other monarchs and all leaders of the South belt alliance to articulate our common origins, linkages and collective aspirations.

The African Sociocultural Harmony and Enlightenment Foundation, the first Original African thinktank was brought together to articulate and disseminate Original African origins and linkages, in order to increase the collective intelligence of the Nigeria majority towards an epistemic democracy, which can only occur when all interests are represented at the table and not only Fulani and Western interests. Instead of divide and rule and separatist distractions, a well articulated Original African cultural platform can inspire a political movement that can fairly argue and agitate our common interests, instead of youth buffoonery by misguided overambitious youth.

The Northern Elders Forum have cried out in despair, knowing this was the beginning of the end of the undeserved Northern hegemony and true freedom has eventually come to the Original Africans of South and Middlebelt that form 70% of the population. 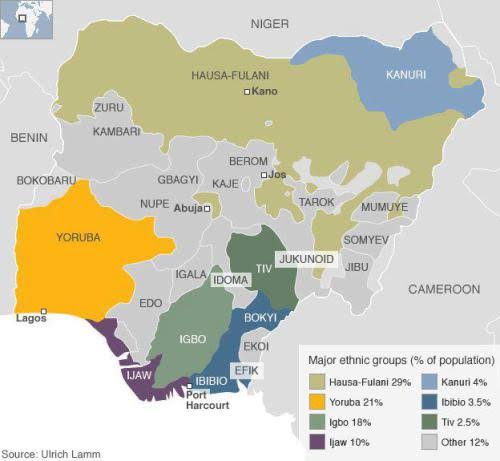 It would go down in history that our Southern and Middlebelt elders who won political independence left us a route to cultural independence necessary for a sustainable Original African political platform that can stand the test of time and focus like the North Islamic and European army platforms. They have taken us to the mountain top and we have seen the promise land, and nothing absolutely nothing will stop the rise of the Black Race.
Prince Justice Faloye