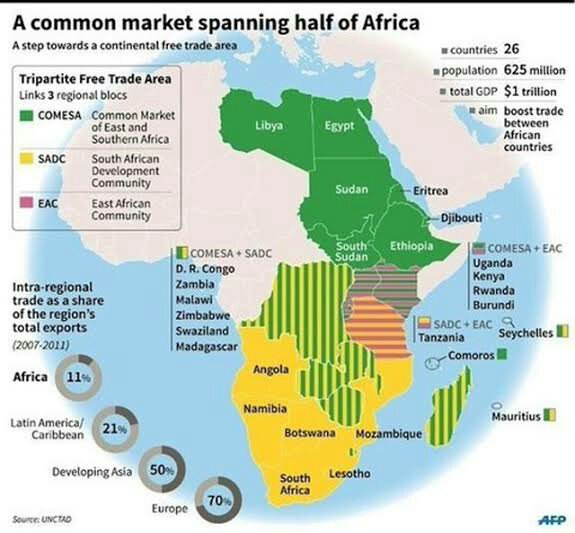 Like in 1953 when the Northern Islamists claimed that we were not ready for political independence from European Berlin Conference contraptions, Buhari has repeated history in his claim that Nigeria was not ready for economic independence by rejecting the African Free trade agreement that would override the constraints of European Berlin Conference contraptions.

Like in the Fifties when Southern Nigerians challenged that decision, South Africa is pleading with him to allow Black African free from economic slavery.

Nigeria, being the African Giant, whose arms and legs were cut into the various African nations, is essential to the success of an African free trade zone and single currency. After intentionally sabotaging Nigeria foreign exchange mechanism in 2015 to destroy Africas largest economy, Buhari has moved to the next level by arresting the economic development of Black Africa.

In what highlights the difference between Original African and Afroasian interests, all Original Black African nations backed the policy, with the exception of Afro-Asiatic Nations of Morocco and Algeria, and Buhari who represents Afro-Asiatic interests in Nigeria.

Africa has the lowest intra-African trade with only 20% trade conducted between Africans compared to European and Asian trade blocs that boast up to 70%. Since nearly half of Black African Nations are Francophiles tied to the apron strings of France through the CFA, Black Africans, especially Nigerians surrounded by Francophone nations, have to jump barriers and bottlenecks in faraway Paris in order to commission huge projects.

Buhari and his sycophants dubiously argue that it is to protect local industry. However, the majority of African manufacturing and economy is the hands of Western multinational giants like UAC, Lever Brothers, GSK, P&G, so the question is why do we have to protect them?

In actual fact, the present economic system along European created African nation-states doesn’t infringed the movement of European multinationals across the African landscape. The real victims are the true Original African business class, made up of Yorubas, Igbos and other Southern Nigerians, who face various bureaucratic bottlenecks and barriers, oppressive tax regimes etc.

In 2003, the IMF had expressed fears that the single currency will be centered around the Nigerian economy and would lead to a shift in regional and later global economic power. Obasanjo supported the single currency and market, but it was put on the backburner by Yar Adua until Jonathan moved it ahead.

One of the key advantages of the single currency was that it would make it difficult to sabotage and devalue African currencies as it is presently done by Western currency speculators, who take advantage that most African nations are mono-economies and it was easy to attack the individual currency by attacking the single commodity it relies on. It would also stop the billions France milks out of Africa through unfair manipulation of the CFA.

To move towards a single currency, it was agreed that African nations should undergo redecimalisation, whereby two decimal points were taken off the currency by 2016 all currencies could be united, first in regional basis, then as a continentwide currency. Jonathan acknowledged that Nigeria was long overdue for a revaluation which he did and the next step was redecimalization, but Buhari came in and oversaw the devaluation of Naira to prevent any talks of redecimalisation and unification.

Another scaremongering excuse is that foreign companies might choose to set up in small countries like Rwanda and use it as a route to overwhelm Nigeria local industry. This is false and based on ignorance of the economies of scale that decide the location of industries. Nigeria, especially Lagos, has the Africa’s largest pool of skilled labour and consumer markets that even South Africans are tapping, therefore any potential investor will first choose Lagos over any other Black African nation to site its industry. Lagos has a larger population and economy than 30 Black African nations.

The truth of the matter is contrary to Pan-Africanism pushed by the likes of Azikwe that regarded Africa as a homogeneous geographic concept, Africa is divided along two major cultural families and interests – Original African (Niger Kongo ethnolinguistic group) and Afro-Asians. While all Original Africans come from the same genetic and cultural origins, Afro-Asiatic groups are products of different cultural imperialism by Euro-Asians and other Afro-Asians.

Afro-Asians – Afro-Arabic and Afro-Greeks – were the greatest attackers and enslavers of Original Africans before the advent of Europeans. And, this didn’t stop with the advent of Europeans as they handed over the largest number of original African ethnicities to the colonists – the Fulani handed over hundreds of Original Africans in the Middlebelt to the British colonists; the Amhara of Ethiopia extended their territory during the scramble of Africa to include Sudanese and Somali lands, while the Zanzibar Arabs of Tanzania handed over the East African coast.

It is these Afro-Asiatic interests that inform Buhari’s decision to sabotage the single currency and free trade area. First and foremost, in the event of restructuring into self-determining regions, the Original African regions will be able to trade across Africa without having to deal with the Northern Afro-Asiatic regions.

Instead of the bloodthirsty Northern Cattle complex that feeds on the blood of original African farmers, Original Africans will have the choice of switching to the Southern Bantu Cattle Complex.

Lagos and Port Harcourt will blossom with trade across Africa. Stopping the billions siphoned from our Original African cousins, Yorubas will benefit from free trade with fellow Yorubas in Benin and across the West African coast, while Igbos and Jukun will benefit from increased trade with Cameroun, Gabon and the Kongo River basin.

Afro-Arabic cattle herdsmen already enjoy an official regional cattle route, which gives them the license to kill Original Africans that stand in their way.

An African free trade agreement will neutralize the effect of European economic imperialism across Africa, and every right thinking Original African should rise to challenge Buhari’s Afro-Asiatic decision like we did in the Fifties and marched to political freedom. This time it is our economic freedom that is in question.