The underlying body of knowledge of Soponna, the Orisa of Diseases, and Osanyin, the Orisa of herbal medicine, has inspired Western Medicine and billion dollar pharmaceutical companies, but modern day Yorubas remain focused on the spirituality of the Orishas without understanding and exploiting their material concepts. 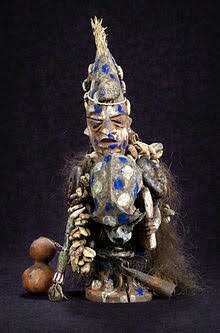 Just like how we regarded Ifa as a mere spiritual concept while others transformed the 256 pulses of Ifa into the foundation of the first 256bit computer.

Long before the whitewashed historical claims that smallpox vaccination was started in 1796 by Edward Jenner, in 1715 a West African slave renamed Onesimus had revealed the Soponna medical procedure to his master, Cotton Mather, Boston’s senior clergy and one of those at the infamous Salem witch trials, who attended Harvard and was co-founder of Yale.

Onesimus explained that the process of using controlled Smallpox infections to produce antibodies that can protect against the full attack was common place in West Africa. The smallpox scabs and puss were rubbed it preferably incised into the upper arm.

The mark of the incision was known to increase the selling price of slaves on Yoruba slave Coast.

Cotton Mather took notes from the African and acted upon the information by spreading the news not only throughout Boston but to England.

Smallpox was a huge scourge outside Africa and the Black Plague practically wiped out two-thirds of Western Europeans in the 1300s, and was threatening the survival of the American colonies as it decimated the native American populations.

When another smallpox epidemic struck Boston in 1721, Reverend Mather rose to the challenge by using the knowledge of Soponna.

It was successful but attracted a racist backlash since it was public knowledge that the revolutionary medical procedure came from an African slave, especially coming so soon after Tituba, the slave at the center of the Salem Witch Trials. My historical fiction novel called Tutuoba, Shangos slave queen was based on this incident.

The Soponna procedure was labelled witchcraft by the Christian Puritans of New England.

It took another 70yrs after many journals had written about the Boston vaccination before Edward Jenner laid claim to the several thousand year old Soponna medical procedure.

The Soponna procedure of controlled infections for antibodies by extension led to the development of antibiotics, which formed a major branch of Western medicine today and source of billions of dollars to the pharmaceutical industry.

The transfer of the underlying principle of Yoruba traditional medicine was not only limited to Soponna but also Osanyin, the Orisa of herbs, and the knowledge of botany.

Europeans knew the attributes of the different African ethnicities and often reflected them in their demand – those from the Senegambia were valued for rice cultivation skills, Yorubas were valued for having a nose for gold in South America and for sugarcane, cotton and tobacco cultivation. Politically, Yorubas were favored for House Negro positions because of their diplomacy while Igbos were frowned upon for being too revolutionary and prone to escape.

Within the African slave community, a wider array of talents and skills were exhibited. It was common place to see herbal portions being hawked around the farms and camps, like we still see the Iya Alagbo’s across Yorubaland today.

It was believed that Osanyin had knowledge of all plants, both good and bad, physiological and psychological, cures and poisons.

In the Yoruba philosophy of there are no coincidences, it is believed that every single plant had its uses as God/Universe has no waste.

Therefore even though some of the original African plants were not available in the Americas, the children of Osanyin understood and adapted every single plant for usage.

While White Masters struggled with their limited medical understanding, the Black African slaves that toiled in subhuman conditions managed to forge ahead with various herbs to stay relatively health.

They had cures for every known aliment but, unfortunately like back in Africa, where we concentrate too much on the spiritual to the detriment of the material, the practise continued in the Americas.

In addition to Yoruba Original African knowledge of cures, Africans in the Americas were also known and greatly feared for their knowledge of poisons, their most lethal weapon against wicked slave masters.

Around 1750 in Haiti, Francois Mackrandal, an Ifa/Osanyin priest popularized the use of poison as a liberation weapon, which sent shivers down the spines of the wicked French slave masters.

Its effectiveness led to a massive manhunt and when he was eventually caught, he was nailed to a door in public to send fear across the Black community.

However, Francois had already established a network of Ifa priests that eventually came together for the Ogun festival from August 14th to 21st 1791, where they launched the Haitian revolution, the only successful revolution in human history to become a nation, and the beginning of the end of Africa slavery in the Americas, as it spread to other islands and by 1805 had led to the independence of Spanish South America.

This is the power of original African Yoruba philosophy and culture.

In North America, a few Europeans whose racism didn’t blur their aspirations moved closer to the children of Osanyin and transfered bits of the knowledge into tablets etc.

With increased Western education that focused on the material, Africans were to excel and be trailblazers.

With Yorubas like Dr Olutoye still pushing the frontiers of medicine in USA of today, you wonder whether the knowledge banks of Soponna and Osanyin were coded into our DNA.

However, we need a more focussed policy to revisit the intellectual properties of the Orishas.

President Goodluck announced the establishment of a herbal medicine university, but it would be better if Yorubas could come together to form an Osanyin university.

Not only do we have herbs for all ailments but we also have biological warfare that could bring world peace.

According to Carnegie, the world would experience peace the day an ultimate weapon is discovered. A weapon than can reproduce itself at minimum cost.

I was forty years old and had undergone dozens of transfusions across the world until a botched transfusion at Newark Beth Israel made me determined to find a natural alternative.

I didn’t have to look for before I found out the Ugu plant, labelled the African Magic plant that could replace my blood within 24hrs.

It made me question the value of my Western education if I didn’t know a common plant like Ugu until 40 and had to go through risky procedures that could have got me infected or nearly killed me in the Newark with wrong blood.

We had just spent tens of thousands to have my mother’s cataracts removed with laser, when I was shocked to hear from Prof Sylvia Oluwole that a common daffodil that grows at the edges of our house was a better cure than laser that could end up making you look at Ibadan like Oyo.

Many of our young women suffer from fibroids while the men have erectile and fertility problems that could be cured with herbs. I believe if I start selling Afato/Ale/Ogun Eyin in fancy packaging, I might make millions like the Senegalese known to hawk Burantashe around various Black festivals every summer.

In the mist of plenty, Yorubas are deprived due to mental and cultural blocks that make them view their knowledge bank accumulated over 10,000yrs by our ancestors as evil and fetish.

Until Yorubas learn that charity begins at home and understand the full impact of their Original African intellectual foundations shared by Igbos, Igalas and other original Africans, the Black Race can’t rise.

Until we understand and believe that our medicine precedes and supercedes that of Western medicine, like the Chinese do, other people will make copyrights of our fathers knowledge to enslave us.

Yoruba need to push the philosophy of Yoruba medicine to challenge the exploitative Western medicine based on profits.

And not only in medicine, but until we realize the full importance of Shango, the Orisha of Justice, and the concept of laws of natural retributive justice, we cant stop corruption.

Until we realize the full import of Oya, the Orisa of revolutionary change, and include women in our political plans, we can’t have true liberation from Western and Afro-Arabic imperialism.

Until we understand the full import of Esu, the Orisha of information, and its different uses, we will continue to fall to cheap Fulani and Western propaganda used to take power.

Until we understand the full import of Osun, the Orisa of love, the astrological opposite of Ogun, we won’t know how to counter the Western hegemonic Ogun military industrial complex.

A river that forgets its source will run out, which might be one of the reasons we keep falling short and remain rooted to the bottom ladder of races.

When eventually the Original African stirs awake intellectually, culturally, politically and economically, the world will tremble.